Trees travel in Salomé Jashi’s Taming the Garden, a jaw-dropping record of sublime beauty and gutted community. The Georgian filmmaker chronicles the pharaonic transport of massive trees — excavated from the earth, hauled overland (and upright) inch by inch, then ferried on the Black Sea — at the behest of billionaire businessman and politician Bidzina Ivanishvili. But this is no simple story of eccentric whims; Jashi’s expansive, wide-angle views let us feel the visceral impact when towns and villages must give up 100-plus-year-old trees, like losing some part of their hearts.

„When I saw it in reality for the first time, even though I was anticipating it, I felt dizzy, I felt like vomiting, which was a really interesting feeling. It meant that something fundamental was off, was shaken up. So I felt this metaphor that you just explained physically in my body. I don’t think the screen can actually convey the magnitude and the dimensions of what we witnessed there and what the people witnessed. But I hope that this meaning of taking away something fundamental, like uprooting something fundamental inside ourselves, is conveyed in the film.“ (Salome Jashi) 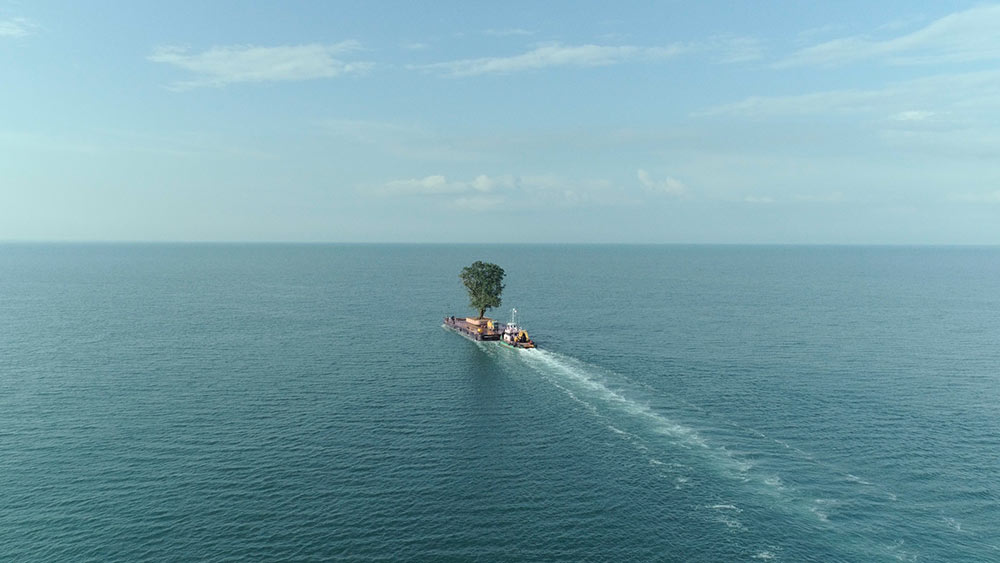 Some time ago, the entire country of Georgia witnessed a surreal scene – a large tree floating in the sea. That was when we learned that the most powerful man in the country had a new passion – to own century-old trees on his private estate. Witnessing this image was like seeing a glitch in the real. It was as if I had seen something I should have never seen. It was beautiful, like real-life poetry, but at the same time it seemed to be a mistake, a kind of discomfort.

I embarked on filming this process as Georgia’s whole coastline was involved in implementing one man’s desire. I wanted to explore what was behind this mesmerizingly strange image; to tell about the ambition of a powerful man, who alters landscapes, moves trees, leaves witnesses perplexed – all for the sake of his pleasure.

I am fascinated by environments and how these environments affect people. More precisely, how we perceive others, and ourselves, in specific environments. The contradiction between settings and the people in them is what often drives my vision.

To me, the film does not have a one-dimensional line as to what it is about. The material spoke of many different aspects of life, which found symbolic expressions in the film, such as the idea of manhood, or forced migration, or uprooting, which is not just a physical process. I also relate the theme of uprooting to my country, where values and a sense of stability is constantly floating. I see the film as an evocative journey into a surreal world, which paradoxically is also fact-based.

We were filming for almost two years. I would travel with my small team to the coast each month to try to capture elements for the film. It was a challenging process as nothing was properly planned. We were dependent on the natural elements like wind, rain, unexpected circumstances in the workers’ routine, even the general political situation of the day. The process of transplanting trees was very slow and key elements would happen very fast. But the biggest
challenge was connected to the local inhabitants. Since the wealthy man behind the scenes is also the most politically powerful man in the country, they were often scared to even appear in front of the camera fearing possible consequences, the fear which we, like other fragile democracies, have in our blood.

Taming the Garden, 2021. Written and directed by Salomé Jashi. SYNOPSIS: Documentary follows trees that are transported, at great expense and inconvenience, from the coast of the Republic of Georgia to the private garden of that country’s former prime minister. Documentarian Salomé Jashi captures environmental disarray in a singularly startling – if extremely methodical – manner […]

The Trump administration is the whitest in decades. „I Am Not Your Negro“ confronts both past and present racism

Source: #WhiteHouseSoWhite: “I Am Not Your Negro” illuminates America’s ongoing race problem – Salon.com

“When, during the course of an interview for The New Yorker, I told the interviewer (Mark Singer) that I believed stories are found things, like fossils in the ground, he said that he didn’t believe me. I replied that that was fine, as long as he believed that I believe it. And I do. Stories aren’t souvenir tee-shirts or Game Boys. Stories are relics, part of an undiscovered pre-existing world. The writer’s job is to use the tools in his or her toolbox to get as much of each one out of the ground intact as possible. Sometimes the fossil you uncover is small; a seashell. Sometimes it’s enormous, a Tyrannosaurus Rex with all the gigantic ribs and grinning teeth. Either way, short story or thousand page whopper of a novel, the techniques of excavation remain basically the same.” (Stephen King’s manual On Writing)

The writer as a paleontologist leads me automatically to the fish paleontologist Neil Shubin and his famous book ‚Your Inner Fish‘ in which he says that every reptile, bird and mammal alive today is descended from ancient fish.

Sure enough, in 2004, scientists found one of those transitional species: Tiktaalik roseae, a 375-million-year-old Devonian period specimen discovered in the Canadian Arctic by paleontologist Neil Shubin and his colleagues. Tiktaalik, explains Shubin on the latest episode of the Inquiring Minds podcast, is an „anatomical mix between fish and a land-living animal.“

„It has a neck,“ says Shubin, a professor at the University of Chicago. „No fish has a neck. And you know what? When you look inside the fin, and you take off those fin rays, you find an upper arm bone, a forearm, and a wrist.“ Tiktaalik, Shubin has observed, was a fish capable of doing a push-up. It had both lungs and gills. In sum, it’s quite the transitional form.

Shubin’s best-selling book about his discovery, Your Inner Fish: A Journey Into the 3.5-Billion-Year History of the Human Body, uses the example of Tiktaalik and other evolutionary evidence to trace how our own bodies share similar structures not only with close relatives like chimpanzees or orangutans, but indeed, with far more distant relatives like fish. Think of it as an extensive unpacking of a famous line by Charles Darwin from his book The Descent of Man: „Man still bears in his bodily frame the indelible stamp of his lowly origin.“

And now, PBS has adapted Your Inner Fish as a three-part series (you can watch the first installment here), using the irrepressible Shubin as a narrator who romps from Pennsylvania roadsides to the melting Arctic in search of fossils that elucidate the natural history of our own anatomy.

This documentary is about that very remarkable man, the former NSA intelligence analyst and whistleblower Edward Snowden, shown here speaking out personally for the first time about all the staggering things governments are doing to our privacy.

Fundamentally, privacy is being abolished – not eroded, not diminished, not encroached upon, but abolished. And being constructed in its place is a colossal digital new Stasi, driven by a creepy intoxication with what is now technically possible, combined with politicians’ age-old infatuation with bullying, snooping and creating mountains of bureaucratic prestige for themselves at the expense of the snooped-upon taxpayer.

Yet in spite of the evidence put in the public domain about this – due to Snowden’s considerable courage – there has been a bafflingly tepid response from the libertarian right, who have let themselves be bamboozled by the “terrorism” argument. There’s also been a worrying placidity from some progressive opinion-formers who appear to assume that social media means we have surrendered our right to privacy. But we haven’t.

Laura Poitras’s film shows the first extensive interviews with Edward Snowden, conducted in his hotel room in Hong Kong when he first revealed his information to reporter Glenn Greenwald: Snowden contacted him under the handle Citizenfour. Greenwald wrote about it for Salon, in his book No Place to Hide and for this newspaper. Snowden risked his neck, revealing that despite official statements to the contrary, the US and the UK were widely using their ability to eavesdrop upon every phone call, every email, every internet search, every keystroke. The pre-emptive mining of data has gone beyond suspicion of terrorist activity. As Snowden says: “We are building the biggest weapon for oppression in the history of mankind,” and a martial law for intercepting telecommunication is being created by stealth. This is despite the bland denials of every official up to and including President Obama, whose supercilious claim to have been investigating the issue before the Snowden revelations has been brutally exposed by this film.

Snowden himself seems notably calm and reasonable. Where Julian Assange is mercurial, Snowden is geeky and imperturbable, with a laid-back voice that sounds like that of Seth Rogen. Pressure that would have caused anyone else to crack seems to have have no real effect on Snowden, and he appears unemotional even as he reveals how he had to leave his partner, Lindsay Mills, in the dark. (She is now living with him in Russia, where he is in exile, a country whose own record on civil liberties provide a scalding irony.)

There are moments of white-knuckle paranoia. The interview is interrupted by a continuous alarm bell; Snowden calls down to reception, who tell him it’s a routine fire drill. Snowden is satisfied by the explanation, but disconnects the phone in case it is bugged. When he types key passwords into his laptop he covers his head and arms in a bizarre shroud, like an old-fashioned photographer, so he can’t be filmed. This is what he calls his “magic mantle of power”. It looks absurd, but it isn’t precisely melodramatic, and Snowden seems as if he both knows what he is doing and appreciates the absurdity of it all.

Meanwhile, governmental forces are ranged against him – and against ordinary citizens making a stand against snooping. Poitras shows us a scene from a US court case in which AT&T phone customers took action against having their affairs pried into. A sycophantic, bow-tied lawyer for the government tries to suggest that a court is not the proper place to discuss the matter. When a plain-speaking judge rebuked this weasel, I felt like cheering.

So what else can be done? There is a funny moment when Citizenfour shows how German chancellor Angela Merkel is far from amused at having her mobile phone conversations listened to by the NSA. It was an exquisite moment of diplomatic froideur and possibly did more to make Obama take this seriously than anything else.

Now activists are warning of “linkability”. In US cities, subway commuters are being asked to put their transit pass accounts on their actual credit cards. One card fits all, and also gives officialdom access to a whole lot more of your information. British cities are being encouraged to do the same thing with “contactless” cards. Maybe we all need to think again. Citizenfour is a gripping record of how our rulers are addicted to gaining more and more power and control over us – if we let them.